Today I am pleased to have Icy Sedgwick guesting on my blog. If you visit her website, there is a free book up for grabs - her five star rated “Harbingers: Dark Tales of Speculative Fiction”.

Here she applies her vast folkloric knowledge to the beautiful foxglove plant. What better way to cheer up the dreary weather of November than with a reminder of summer?

Foxgloves are a beautiful sight in the wild parts of England. Sometimes they even adorn gardens and parks! They’re poisonous, but they give us digitalis for use in heart medicine. They’re also beloved by the fairies.

So what other folklore surrounds the foxglove?

Some think the name ‘foxglove’ is actually derived from Folk’s Glove. The foxglove is also known as dead man’s bells and witches’ gloves. But it’s also known as Goblin Gloves, Fairy’s Glove, Gloves of Our Lady, Bloody Fingers, Virgin’s Glove, Fairy Caps and Fairy Thimbles! They are among the prettiest of the poisonous plants. The digitalis extracted from foxgloves is used in heart medicines, most typically Digitoxin and Digoxin. This medicinal use was actually discovered way back in 1775, after Scottish doctor William Withering persuaded a local gypsy to tell him the secret of her herbal heart remedy.

But do not consume any part of the plant yourself. The plant is toxic, but planting it in the garden may grant your house protection. It is also said to attract fairies and according to legend, the white spots inside each bell are marks left by fairies or elves. Others believe the marks represent the foxglove’s poison. 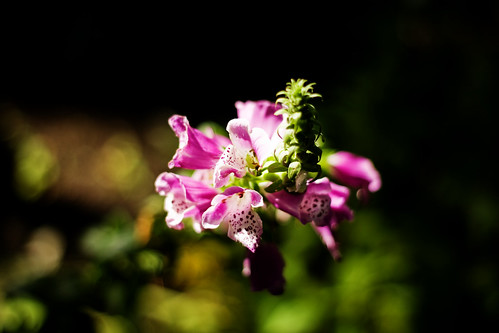 But don’t pick the foxglove and bring it inside, as it’ll annoy the fairies. Leave it outside where it’ll be a favourite spot for bees!

There’s a strong association between fairies and foxgloves.

According to Gobolino, the juice of foxgloves was once used to commune with fairies, and the leaves can allegedly break fairy enchantments (2012). The Forest Fairy explains further that putting foxglove leaves beneath the crib of a child stolen by the fairies will lure them back (2014). In some sources I read, the name ‘fox glove’ was just a misspelling of ‘folk’s glove’. In others, the name came from the fact that fairies apparently taught foxes to ring the bells, warning other foxes of hunters in the area. 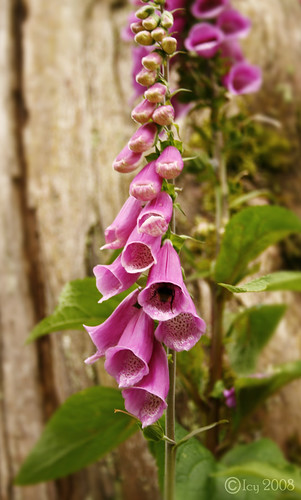 Folksglove actually dates to the time of Edward III (1327-1377), but according to Botanical.com, it only has one foreign name that makes any reference to foxes. Its Norwegian name, Revbielde means Foxbell, perhaps related to the northern legend that bad fairies gave foxgloves to foxes to wear on their paws so prey wouldn’t hear them coming. Foxgloves are noted for bending gracefully in the wind, but Theresa Green explains that their movements have nothing to do with air flow! Apparently they can recognise fairies, and other spiritual creatures, and the foxgloves are bowing out of respect as they pass by (2012). Its legends extend beyond fairies. According to Roman mythology, Juno grew tired of Jupiter conceiving children with other women – but not her. The goddess Flora touched a foxglove to her belly and breasts, and Juno conceived the god Mars.

All this from a plant that now gives us digitalis for heart medicine!

Part of this post originally appeared on Icy Sedgwick’s blog but it has been expanded and made all shiny with brand new content! You can find the original here, if you also want to read about Deadly Nightshade and Angel’s Trumpet.

The Just and Unstoppable